You will achieve your weight loss goals much faster if you have a backup plan in place.  A backup plan is an alternative plan that you implement in the event your primary plans don’t materialize.  Often referred to as a plan B, a backup plan is your alternative source if Plan A does not work out.  It doesn’t hurt to have plans C, D, …..etc.  Putting these plans in place means that it is more likely you will complete your workout for the day.

Yesterday was the fourth of July.  I was trying to fit a lot into one day.  I had a parade in the morning, a trailer for sale that I was going to show, a workout planned at Red Rocks, and a car show/cruise planned for the evening.

Everything was going well until I got to Red Rocks around 1 PM.  When I entered the parking lot, the presence of attendants at the pedestrian entrance indicated the amphitheater was closed.  This is the area of the park where I work out.  The closure meant that plan A was no longer a viable option.  It was time to implement plan B.

Plan B had to fit into my daily schedule.  It had to be between Red Rocks and my next destination which was a car cruise in Golden, Colorado.  Fortunately there was an elevated hike that I climb along the way.  This hike has a nice Park and Ride Parking lost.  The climb itself is an up an invigorating slope that challenges my thighs and calves.  Incidentally climbing slopes is really working as I get a lot of compliments on my legs.

I climbed the slope and went along the trail above on the ridge.  Along the way I collected my thoughts.  There were other things to do on this day.  Among them were the desire to text a 4th of July greeting to friends and family, make my daily calls as I was in town near a good signal, and the final effort which was to acknowledge Bob Ross who had died in 1995 on the 4th of July.  It was hard to believe this man had been gone for 20 years.  Bob has had a huge influence on my life and painting success.  See more at my website http://scott-deuty-fine-art.com/ 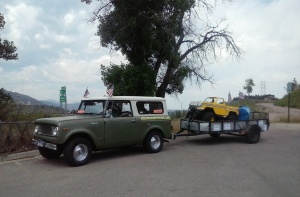 My Scout an Monster Truck All Decked out for the Parade

In addition to getting a workout, I was celebrating being free in such a wonderful country as America.  To the east was a shooting range and motocross track where Americans were enjoying freedom.  To the south was Bandimere speedway where racers and fans were drag racing.  Below me was another hiking trail and Red Rocks amphitheater.  To the west was the Rocky Mountains.  An endless stream of travelers headed into the mountains to enjoy the holiday.  Few semis were among the traffic.  I felt for those ones that were present whose drivers chose to work on the holiday.

My final destination was the Golden Car Cruise, a monthly event of parking, walking around parked cars, viewing cruising cars, and cruising among the cars.  This event was my plan C of sorts as I walked for about an hour.  Although it was on flat land, it was good exercise. 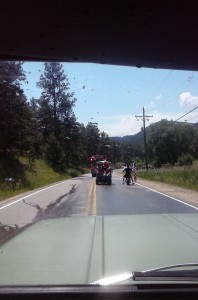